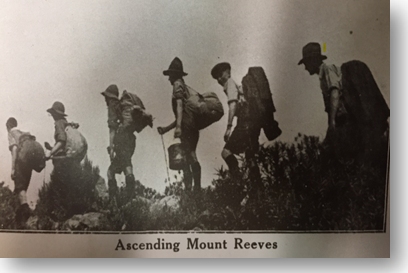 The 1921 edition of the annual Wellingtonian contains epic stories from World War 1 that had only just finished 3 years earlier. One that stands out just a little, is of Bernard Freyberg swimming several kilometres, from one of the troop ships to the shore on the Gallipoli peninsula at midnight on 25th April 1915. He set up flares on a beach some distance from the landing site as a decoy to divert Turkish troops from where the landings would actually take place. Much of his swim was done under enemy fire. An extraordinary and almost unbelievable story of bravery and commitment.

The 1921 Wellingtonian also has a short article covering the founding of the tramping club. One of the ‘vice presidents’ was Mr. Gifford after whom the observatory up behind the college was later named. Here is a quote from the article. ‘Commencing on Nov 5th a series of short tramps over the hills near Wellington will, it is hoped, train our members for more ambitious expeditions into the bush country east of Wainuiomata and at the head of the Hutt Valley.’ Later the article continues ‘we do not wish to rob cricket and other summer pastimes of their enthusiasts, but we earnestly ask all those who are not engaged in other activities to give the Wellington College Tramping Club a trial… subs 1s per annum’

In the following years Wellington College groups successfully completed the ‘Southern Crossing’ of the Tararua Ranges on a number of occasions. This was no mean feat, in an era when clothing and equipment, transport, lack of accurate weather forecasts and the condition of the tracks made such trips extremely challenging.

In 2021 we are fortunate to have polypropylene, Gore-Tex and merino wool clothing, comfortable backpacks and easy access, not just to the Tararuas ranges but many other backcountry locations throughout the lower north and upper South Islands. Some of the tracks are still just as muddy, however! Several staff members at Wellington College have significant experience in the outdoors and it is on the back of this expertise and enthusiasm that we are able to run 3 – 4 weekend trips each year into our awesome National and Forest Parks. Many of the students who come on these trips are also working towards the internationally recognised Duke of Edinburgh’s Hillary Award.

Earlier this term, 24 students, 3 staff members and a a sprinkling of former staff members and parents completed a crossing of the Ruahine ranges, which form a spine along the lower – mid North Island, to the north of Palmerston North. This is the 3rd time in the last decade that Wellington College students have successfully completed this crossing, experiencing a combination of stunning bush, open tops and river travel that has included sightings of whio or blue ducks, in the Oroua river.

In Term 2, on the weekend of 15th – 16th May, weather permitting, a year 10 group will tramp in to Tutuwai hut in the Tauherenikau river in the Southern Tararua ranges. Students will fly-camp on the river flats below the hut. This trip will re-trace part of the route covered by the first Wellington College party to complete a Southern Crossing, 99 years ago.

Later in the year the tramping club will visit the North Island’s central plateau and the Lewis Pass area of the upper South Island.