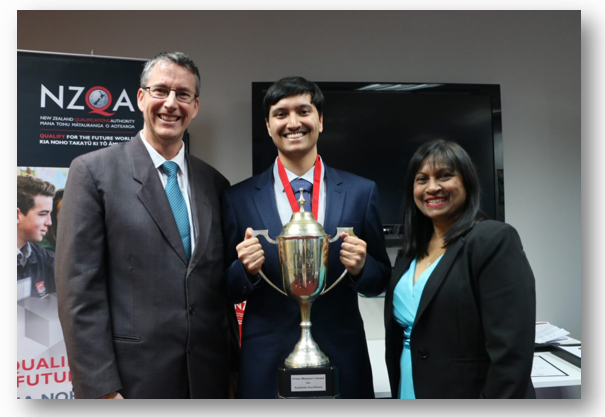 Wellington College's Liam Anderson was recognised as New Zealand's top student in 2019 in a short ceremony at the New Zealand Qualifications Authority (NZQA) held on Wednesday 26 August. Liam was joined at the ceremony by his parents and Wellington College staff members - Phil Kendon and Gregor Fountain, along with the senior staff from NZQA. At the end of the ceremony, as afternoon tea was served, Liam received a personal phone call from the Prime Minister who congratulated him on his achievements.

The Prime Minister’s Award for Academic Excellence recognises the success of the very top New Zealand Scholarship student in the country. The recipient has the most outstanding examination results and the highest overall academic excellence of all New Zealand's Premier Award winners.

Liam achieved Outstanding Scholarships in Chemistry, Physics, Spanish, and Statistics, and Scholarship in Biology, Calculus, English, and Health and Physical Education. He was also the Top Subject Scholarship Award winner for Spanish.

Liam is currently studying for his Bachelor of Science at Victoria University of Wellington. Congratulations to Liam, his family, all of his teachers, and his classmates throughout his time at Wellington College who challenged him and stimulated his learning and achievement.