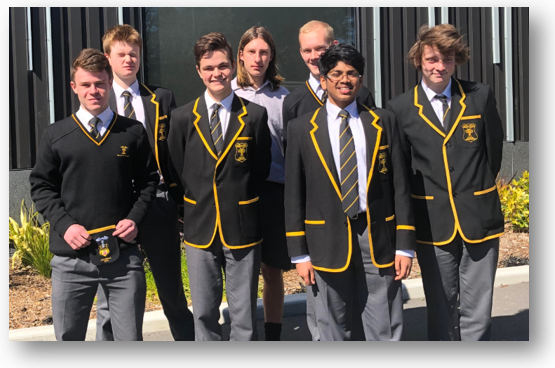 Blues awards are among the most prestigious awards presented to students involved in sport or arts at Wellington College. To qualify a student must have achieved at the highest level in their chosen activity by being selected for New Zealand at the highest secondary school level or through winning a national title or setting a national record.

At our assembly on Thursday 26th September, eight extraordinary students were presented with 2019 Blues awards.

Atakura is Wellington College’s premier swimmer.  He won 5 medals at the NZ Secondary School Swim Championships – 3 of them gold against the country’s top under 19 swimmers. He also won a bronze medal in the Open Men’s 200 metre butterfly at the New Zealand Championships. He would have been selected for the NZ Team to compete in Australia if he had not already been selected for the New Zealand Surf Life Saving team which was competing in South Africa at the same time. This selection based on winning a gold medal at the National Surf Lifesaving Championships at the beginning of the year.

Henry is a member of the Wellington Phoenix Under 20 team in the Honda Premiership and captain of the Phoenix Under 17 team.  It has just been confirmed this week that he has been selected to play for the New Zealand Under 17 team to play in the World Cup in Brazi which starts in October.

Roman is in his second year in the Wellington College 1st XI hockey team. He is a member of the New Zealand Under 18 team - the Junior Black Sticks.

Joseph plays the clarinet for the New Zealand Youth Symphonic Winds. A gifted musician, Joseph also sings in the Wellington College Barbershop Chorus, plays the clarinet in the school orchestra and the tenor saxophone in the Jazz Band. He was part of the trio that composed and played the backing music for 'Romeo and Juliet' in the Sheilah Winn Shakespeare Festival.

Andrew is a member of New Zealand's premier men’s barbershop chorus - Vocal FX. He is involved in a number of vocal groups within the school including the Chorale, Barbershop Chorus and the Barbershop Quartet. He also plays in the Jazz ensemble and like Joseph, was a member of the trio playing for 'Romeo and Juliet' in the Sheilah Winn Shakespeare Festival..

Dhruv is also a member of Vocal FX which is extraordinary for a Year 10 student. He also sings in the Wellington College Chorale, Barbershop Chorus and Quartet and plays in the Jazz Ensemble.

George receives his Drama Honours for being awarded a place in the prestigious National Shakespeare Schools Production Week. 43 students are chosen from the 5,000 who participate in the festival nation-wide. George performed in the national festival in 'Two Noble Kinsmen' and received significant recognition for his directing of the New Zealand  Sign Language 'Romeo and Juliet' performance.